Thanks to Katie for these! I loved every bite and I think I ate half the pan. 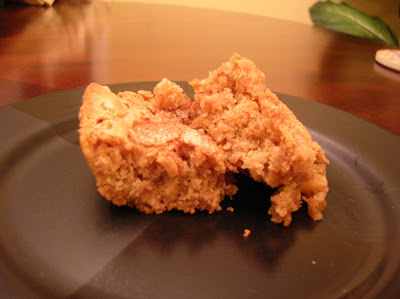 2. In medium bowl, combine flour, baking powder, salt, cinnamon, nutmeg, allspice, and cloves. Whisk to combine well and set aside.
3. In bowl of stand mixer (or in a bowl with a hand mixer), combine sugars and butter and beat on medium high until light and fluffy, about 1 minute. Add eggs, one at a time, beating well to combine. Add vanilla extract and beat to combine.
4. Turn mixer on slow and fold in flour mixture a little at a time until just combined.
5. Fold in apples.
6. Spread mixture evenly into prepared pan and sprinkle top generously with cinnamon sugar.
7. Place in oven and bake until cooked through, when top slightly bounces back to the touch, about 30 minutes.
8. Remove from oven and let cool completely before removing from pan, cutting and serving. (bars will be very soft)

Yeah, I ignored that last step, as evidenced by the lump of cookie bar on my plate, but at least I attempted to cut them, instead of just digging right in with a fork.

This entry was posted in desserts and tagged apples, cinnamon. Bookmark the permalink.