When Tom and I went to the grocery store for the ingredients for the last post, I was really wondering to myself if I was ever going to use that toasted sesame oil that we bought, but here we are, no more than two days after the Asian Turkey Burgers, and using it again. That’s right, we’re on an Asian kick here, and it’s been quite tasty: 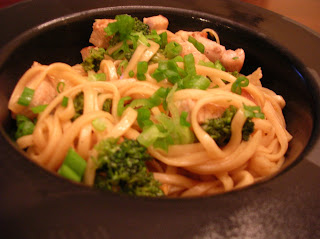 2. Heat a little more oil in the same skillet. Season both sides of pork with salt and black pepper. Add pork to the skillet and cook 2 minutes per side, until golden brown.

3. In a medium bowl, using a spoon, combine orange marmalade, broth, soy sauce, and sesame oil. Mix well and add to the pork in the pan.

4. Bring to a simmer for 5 minutes, or until pork is cooked through and sauce thickens and reduces.

This recipe is based on one from the Food Network’s Robin Miller. We added the broccoli, since there were no veggies originally in this dish, and cut the amount of marmalade. Asian food is typically waaaaaay out of my cooking comfort zone, since I tend to gravitate towards one dish Italian pasta recipes, so this was a great way to ease into something a little bit different!