THESE ARE NOT IN ANY WAY HEALTHY.
There’s your disclaimer, but the concept behind these cupcakes, which consists of dropping a shot glass of Bailey’s and Jameson into a Guinness and chugging it all before it curdles, really isn’t healthy either.
But they both taste delicious. & with these cupcakes, you’ll at least come out with your two front teeth still intact.
Guinness cupcakes with chocolate ganache filling and Bailey’s icing got a big thumbs up from everyone at our Super Bowl party. 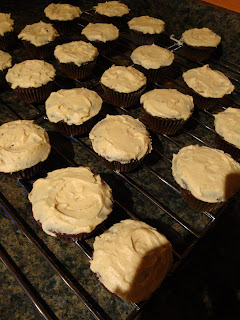 Whisk flour, sugar, baking soda, and salt in large bowl to blend. Using stand or electric mixer, beat eggs and sour cream in another large bowl to blend. Add Guinness-chocolate mixture to egg mixture and beat just to combine. Add flour mixture and beat briefly on slow speed. Using rubber spatula, fold batter until completely combined. Divide batter among cupcake liners, filling them 2/3 to 3/4 of the way. Bake cake until tester inserted into center comes out clean, rotating them once front to back if your oven bakes unevenly, about 17 minutes.

2. Ganache. Chop the chocolate and transfer it to a heatproof bowl. Heat the cream until simmering and pour it over the chocolate. Let it sit for one minute and then stir until smooth. (If this has not sufficiently melted the chocolate, you can toss it in the microwave for about 20 seconds at a time, stirring each time.) Add the butter and whiskey, stir until combined. Let the ganache cool until thick, but still soft enough to be piped. You can put it in the fridge, but YOU MUST stir it every ten minutes. It takes about 20 minutes to thicken. 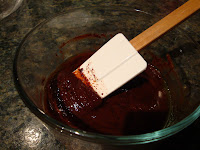 (If your ganache looks separated like this, you have failed. It’s ok. I did too. Try again.)

3. Filling the cupcakes. Using a knife (or 1 inch round cookie cutter, if you have one), cut a small circle in the middle of each cupcake and pull out the middle. Eat those. They’re good. 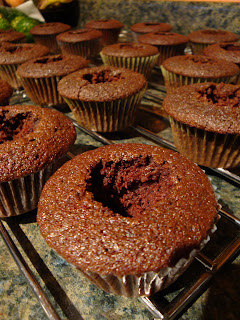 Put the thickened ganache in a Ziploc bag and snip one of the corners (or put it in a piping bag, if you have one). Fill the cupcake holes with the ganache. *I think that we made our holes to big…that’s why we made such a large batch of ganache. Alter it if you wish, but we thought it was good like this.*

4. Make icing. Whip the butter in the bowl of an electric mixer, or with a hand mixer, for several minutes. It needs to be very light and fluffy. Slowly add the powdered sugar, a few tablespoons at a time.

When the frosting looks thick enough to spread, drizzle in the Bailey’s and whip until combined. If this has made the frosting too thin (it shouldn’t, but just in case) beat in another spoonful or two of powdered sugar.