We used to talk a lot more about what we’ve been drinking, but I got distracted or something. So, here’s a peek into our recycling bin, lately. 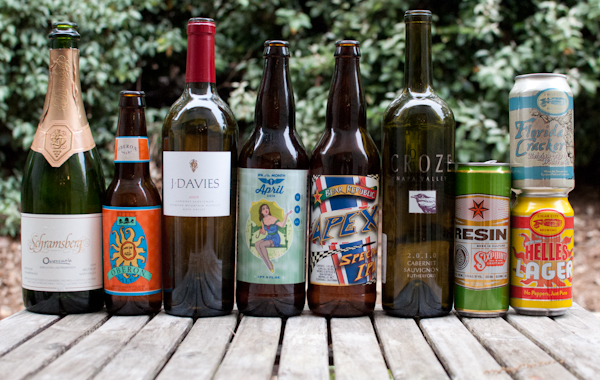 Schramsberg Querencia // A brut rosé made up of predominantly Chardonnay, to keep it light-bodied & crisp, with a bit of Pinot Noir for color & brightness. Bubbly is not just for special occasions.

Bell’s Oberon // A pale wheat ale that’s a springtime favorite. It’s released each year on the first day of baseball season, & while wheat ales & baseball are not our absolute favorites, this beer is a little spicy, a little fruity & always a sign we’ve finally reached the end of winter (which apparently Tom said live on 99.9 The Fan).

Foothills IPA of the Month – April // This month’s IPA release is made with experimental hops & dry hopped with Amarillo & Centennial hops. Clean, but not as brash as we (me, especially) prefer.

Sixpoint Resin // Slim can, big hop flavor. We’ve heard rumors that Sixpoint may finally be coming to North Carolina, but until then, you’ll have to snag it elsewhere. We found this in Virginia.

Cigar City Florida Cracker // A good beer for a warm day–a Belgian-syle wheat ale brewed with orange peel & coriander. It’s another one that’s not available in North Carolina, but the good people (they don’t even pay us to say that) at LetsPour will ship it directly to your door.

Cigar City Hotter Than Helles // Apparently we’re gearing up for some hot days, since we also picked up this very easy drinking lager in our LetsPour order.

This entry was posted in beer, drinks, wine and tagged beer, wine. Bookmark the permalink.

2 Responses to What we’re drinking | A peek into our recycling bin.